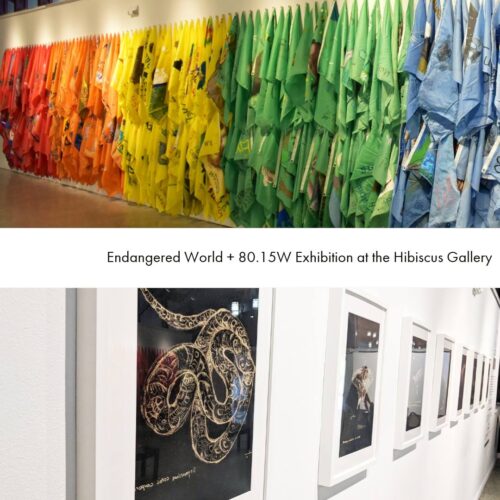 a solo exhibition by

Join us in welcoming special guest Gary Bremen, Biscayne National Park Ranger during our opening reception on Sunday, August 12, 2018 from noon to 2pm. 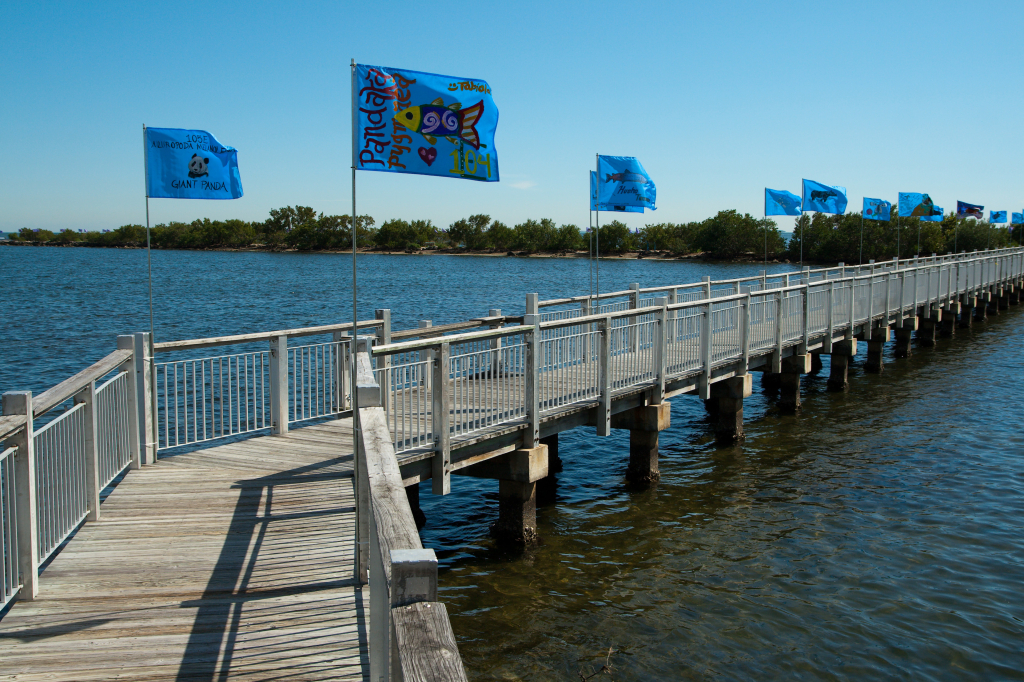 Endangered World: Biscayne National Park: Conceptualized by Cortada, the outdoor installation features 360 brightly colored flags lining Convoy Point’s roads and trails for over a mile. Each flag represents one degree of the planet’s longitude, and 360 individuals and organizations from throughout South Florida decorated the flags with an image of an endangered or threatened animal that lives at that longitude. Participants also committed to an “eco-action” that directly or indirectly mitigates the plight of that animal. (Learn more at https://www.cortada.com/archives/endangeredworld/biscayne-national-park)

80.15 W: In contrast to the exuberance of the outdoor installation is 80.15 W inside the Dante Fascell Visitor Center Gallery. Here, Cortada has created 17 somber works on paper that feature the 17 threatened and endangered species that call Biscayne National Park home. The exhibit is titled for the longitude where the Visitor Center sits to tie it in to the larger installation outside. The pieces were created using reused carbon paper, a metaphor for the impact (or “carbon footprint”) that humans have had on that animal. (Learn more at https://www.cortada.com/2010/80.15W)

In 1968, plans for southern Biscayne Bay included a major petrochemical plant necessitating digging a 40-foot deep channel across the bay for 7 miles in an area that naturally averages 6-8 feet deep. That channel was to conyinue beyond the northern Keys, through the shallow coral reefs, out to deep water. At the same time, plan were afoot to establish the City of Islandia, consisting of the northernmost islands of the Florida Keys (those north of Key Largo). The city was to include single-family and high rise living, bridges, streets, an amusement park and more. A small, but vocal and incredibly persistent, group of citizens fought these plans, and proposed the creation of a national park unlike any other…one covered mostly by water. Fifty years later, Biscayne National Park celebrates its Golden Anniversary as the largest marine park in the National Park System, protecting mangrove forests, shallow bay waters, the undeveloped Florida Keys, coral reefs and evidence of 10,000 years of human history, all within sight of downtown Miami.

The park preserves Biscayne Bay and its offshore barrier reefs. Ninety-five percent of the park is water, and the shore of the bay is the location of an extensive mangrove forest. The park covers 172,971 acres (69,999 ha) and includes Elliott Key, the park’s largest island and first of the true Florida Keys, formed from fossilized coral reef. The park is home to an incredible diversity of animals and plants including over 600 native fish, neo-tropical water birds and migratory habitat, and threatened and endangered species including sea turtles, manatees, the Schaus’ swallowtail butterfly and Florida semaphore cactus. Some animals and plants are in the northern limits of their ranges.Biscayne National Park is a very diverse place. Four distinct ecosystems melt into one another creating rich edge communities or “ecotones.” These edges support an incredible array of wildlife, including hundreds of species of colorful fish, plants found nowhere else in the United States, and visitor favorites like pelicans, manatees and sea turtles. Winds, currents, storms and the park’s close proximity to one of the nation’s largest urban areas means that the entire park is in a constant state of flux — ever-changing in the face of new challenges posed by the constant cycle of building and destruction. (Learn more about Biscayne National Park at https://www.nps.gov/bisc/index.htm)

Titled for Biscayne Bay’s longitude, “80.15 W” features the 17 threatened and endangered species that call Biscayne National Park (in Miami, FL) home. In 2010, Cortada created the drawings on carbon paper, a metaphor for the impact (or “carbon footprint”) that humans have had on that animal, even across the boundaries of protected nature preserve. The carbon paper originals were premiered at the national park’s gallery and are in the permanent collection of NSU Art Museum Fort Lauderdale, Ft. Lauderdale, FL. 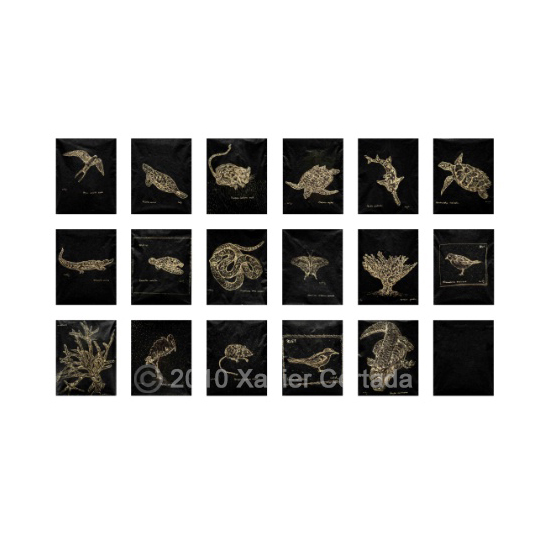