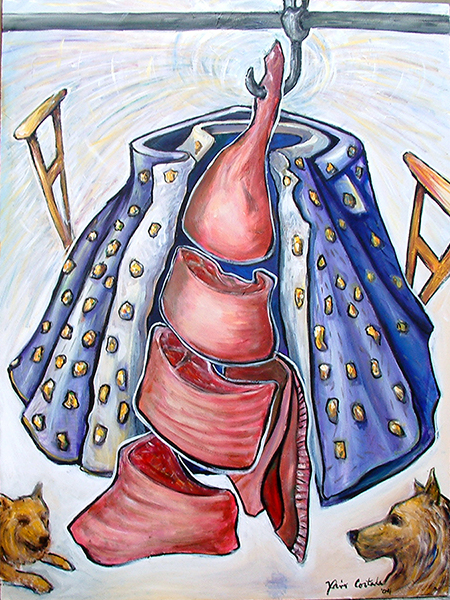 Every day my exercise routine takes me through the spoil islands connecting Miami to Key Biscayne. It’s a free beach, so folks come by, park their cars at the beach head, and picnic away. I really have to watch where I’m stepping — I could land on a stranded jelly fish, the excretions of someone’s dog, a used condom, or on someone’s leftover KFC chicken wings being devoured by an army of red ants.

Every now and then, I also see groupings of Turkey Vultures feasting. It’s an eerie sight. Dressed in black they gather around a circle, pecking away at someone else’s ritual, usually a goat or chicken carcass. These are the sacrificial animals of the Santeria religion, offerings placed at the water’s edge.

Santeria Beach, I call it. I could as easily call it KFC Beach. I guess Santeria sounds more sensational because of the animal sacrifice. It shouldn’t. At the end of the day, some choose to pray before killing, cooking and eating. Others prefer to pray between the cooking and the eating parts. And all of us waste, and thereby needlessly cause animals to be killed.

In Church of Lukumi Babalu Aye v. City of Hialeah, the Supreme Court found that the animal sacrifice ordinances had more to do with stopping Santeria than promoting animal rights.

In the painting I created to represent the case, we have a goat wrapped in some purple sheet, hanging in a butcher shop and chopped into select cuts of meats. Perhaps for a non-traditional Christmas Roast. At the base are two dogs, which could be patiently waiting for some gristle to drop. The two crutches are ambiguous, maybe the butcher is limping because he dropped a cleaver on his foot.

The Hialeah ordinance would have had no problem with the activity depicted in the painting, unless you imbued it with meaning: Unless the meats had something to do with worshiping Babalu.

Babalu — or known more commonly by the syncretic name of San Lazaro — is always depicted wearing a cape, on crutches, and with two dogs at his feet. If that goat was being carved up for Babalu instead of “Bob” or “Lou” or either of their dogs, the City would have made it illegal. The Court killed the ordinance, and gave life to the free exercise of religion.